In the late 1980s I found a drawing that my daughter had made; tiny figures with male and female genitals that she had carefully cut out then abandoned.  I kept the drawing for years, pondering the questions that it raised about gender identity. How do we come to identify as male or female?
Although in Western cultures biological sex differences have been largely understood as fixed, research since the 1990s suggest that the categories of male and female may not be as stable as we thought.  In an article in ‘The Australian’ newspaper on March 11, 1998, Professor Lou Landau, Dean of Medicine at the University of Western Australia stated that between 3 and 30 percent of the population may not be readily classified into the two accepted sex groups, for chromosomal, hormonal, somatic and behavioral reasons.
The Gender Tapestry was woven in 1993 as a way of thinking about these questions, questions now asked with increasing urgency by the LGBTQ movement. 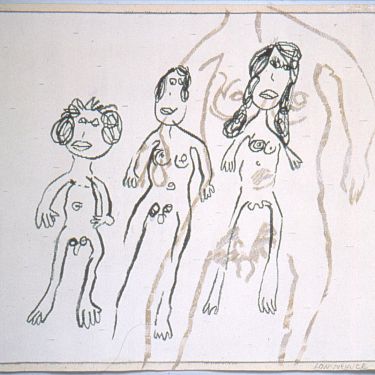