When I was fourteen and a half, and living with my parents in Penang Malaysia, I began to keep a diary. Finding it decades later I was mortified but fascinated to encounter my former self in the process of making sense of who she was in entries that recorded the ups and downs of her emotional life, including her crushes on various boys. But I did recognise myself in one entry, a vehement outburst against a girl who had made a snide remark about my parents in relation to my mother’s illness. It was this text that later, scrawled and painted on a narrow strip of card, became the tapestry ‘Rant’.

The tapestry took 15 years to weave; begun in 2002 but sidelined by a demanding job, it was completed in two bursts in 2009 and 2017. As I wove each phrase creating a narrow strip of text that wound around the loom I pondered their significance. The writer Joan Didion in her essay, ‘On Keeping a notebook’  identified
‘keepers of private notebooks as … apparently afflicted at birth with some presentiment of loss’ and noted that ‘we are well advised to keep on nodding terms with the people we used to be whether we find them attractive company or not, otherwise they turn up unannounced and surprise us, come hammering on the mind’s door at 4am on a bad night and  demand to know who deserted them, who betrayed them, who is going to make amends’.

I was certainly surprised at the fury I directed at an almost forgotten girl more than 50 years ago; a displaced rage, I began to realise as the tapestry grew, that arose from fear that my mother might die – as she did, eight years later.

The processes of creating this work have been as important to me as the result. The initial text, recorded in a burst of anger, was re-written to heighten its emotional force, using the fluidity of watercolour to expose words scrawled in crayon; exposure being the operative word, as the crayon resist process involves obliterating then revealing an image, in this case exposing my shameful and violent feelings in a scrawled and clotted torrent of words. The slow and orderly process of translating these words into woven tapestry fixes them in a dense web and prevents them from sliding off the edge into oblivion. The dark ground of blotches and seepages carefully and systematically woven to create the illusion of spontaneity is part of a deliberate and focused weaving process that gives weight and authority to an utterance, and, as Didion has pointed out, has enabled me to ‘remember what it was to be me’ at that particular time and place - and make amends. 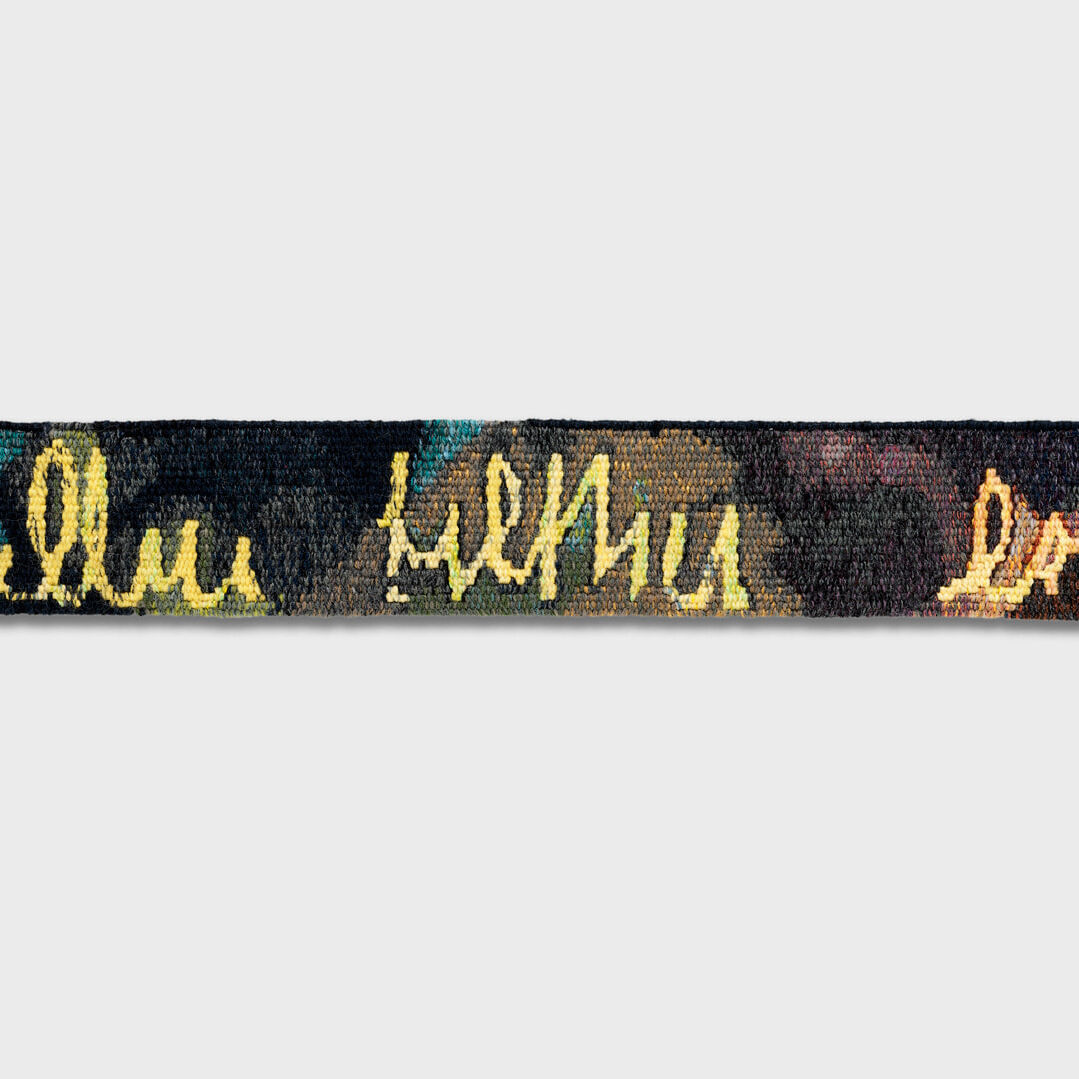 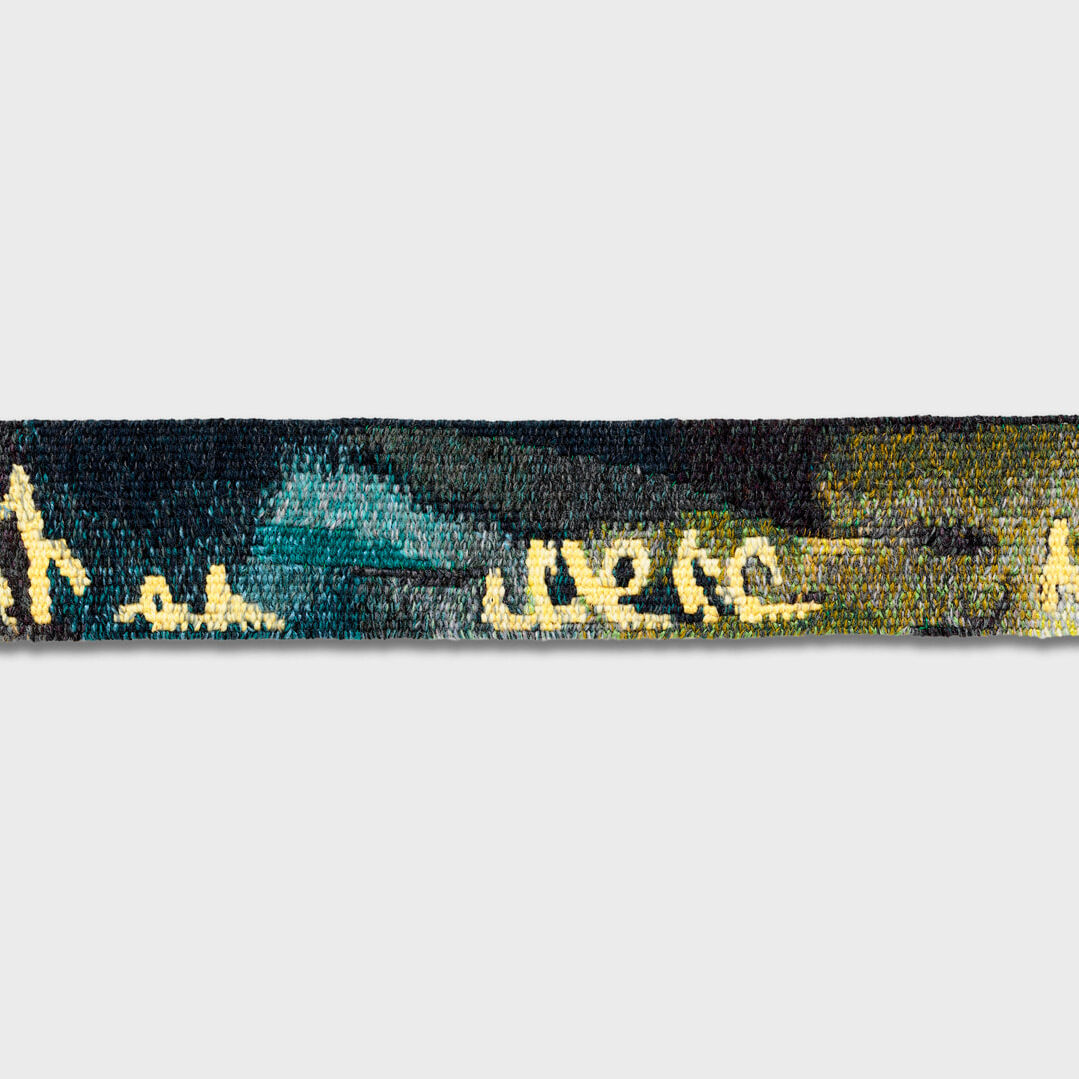 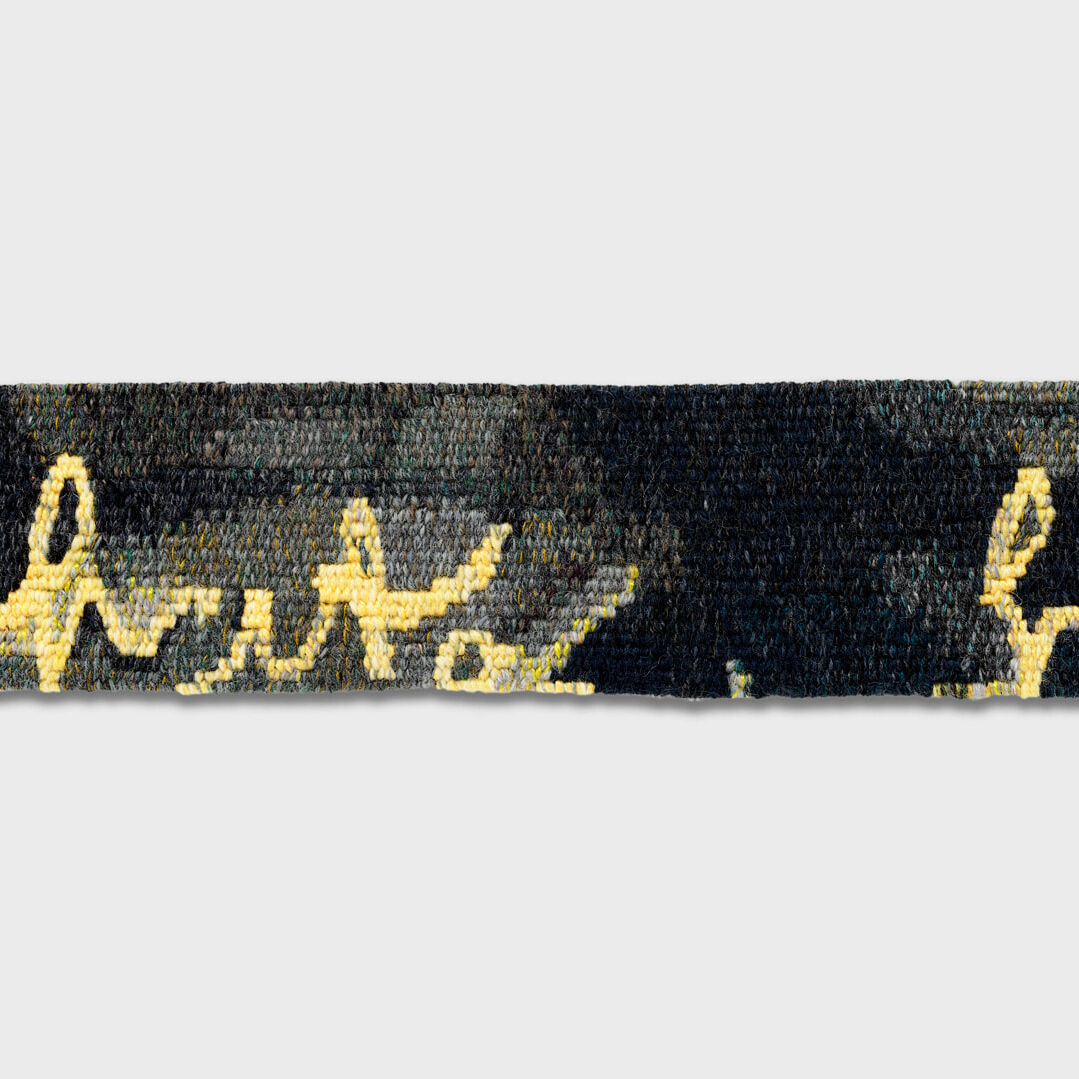 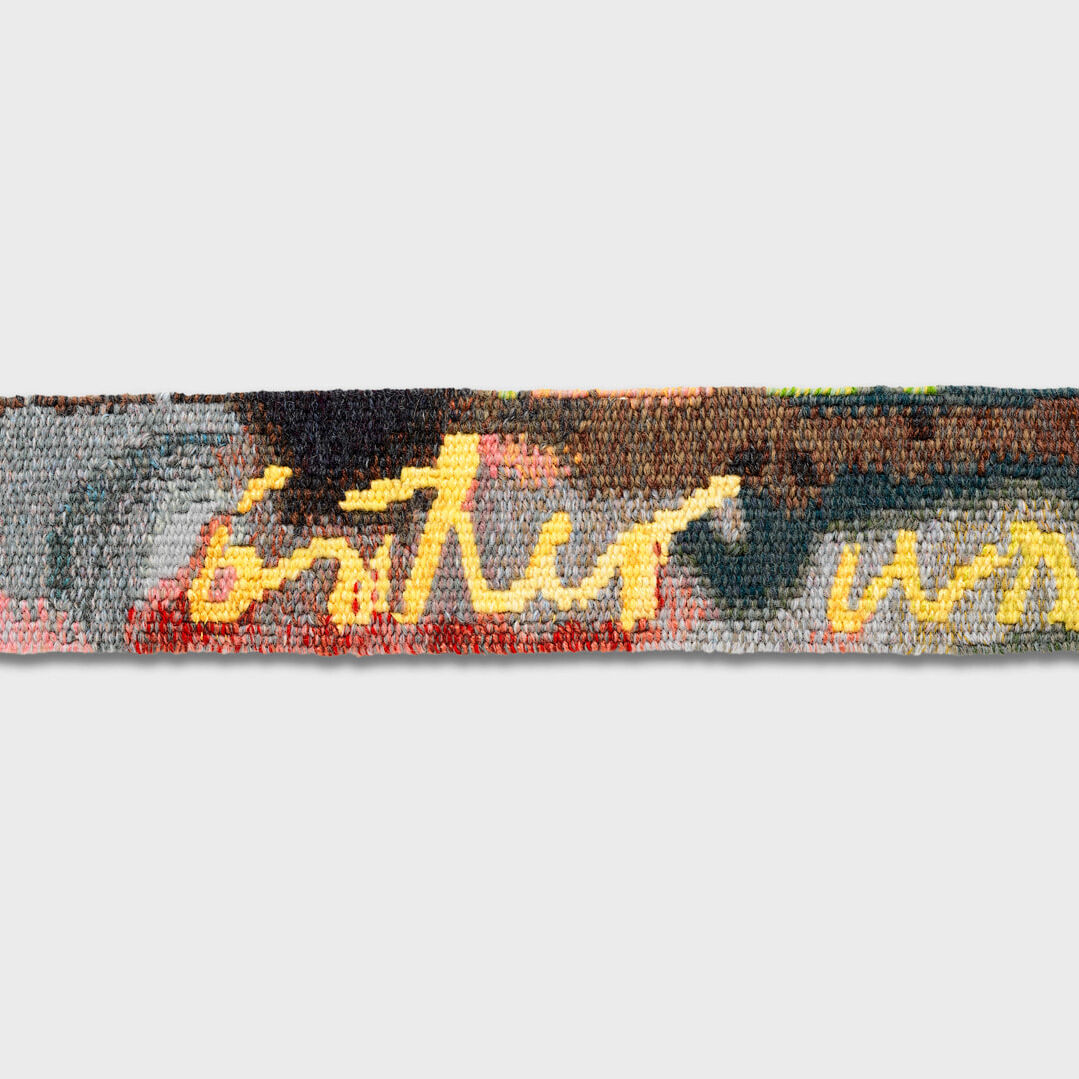 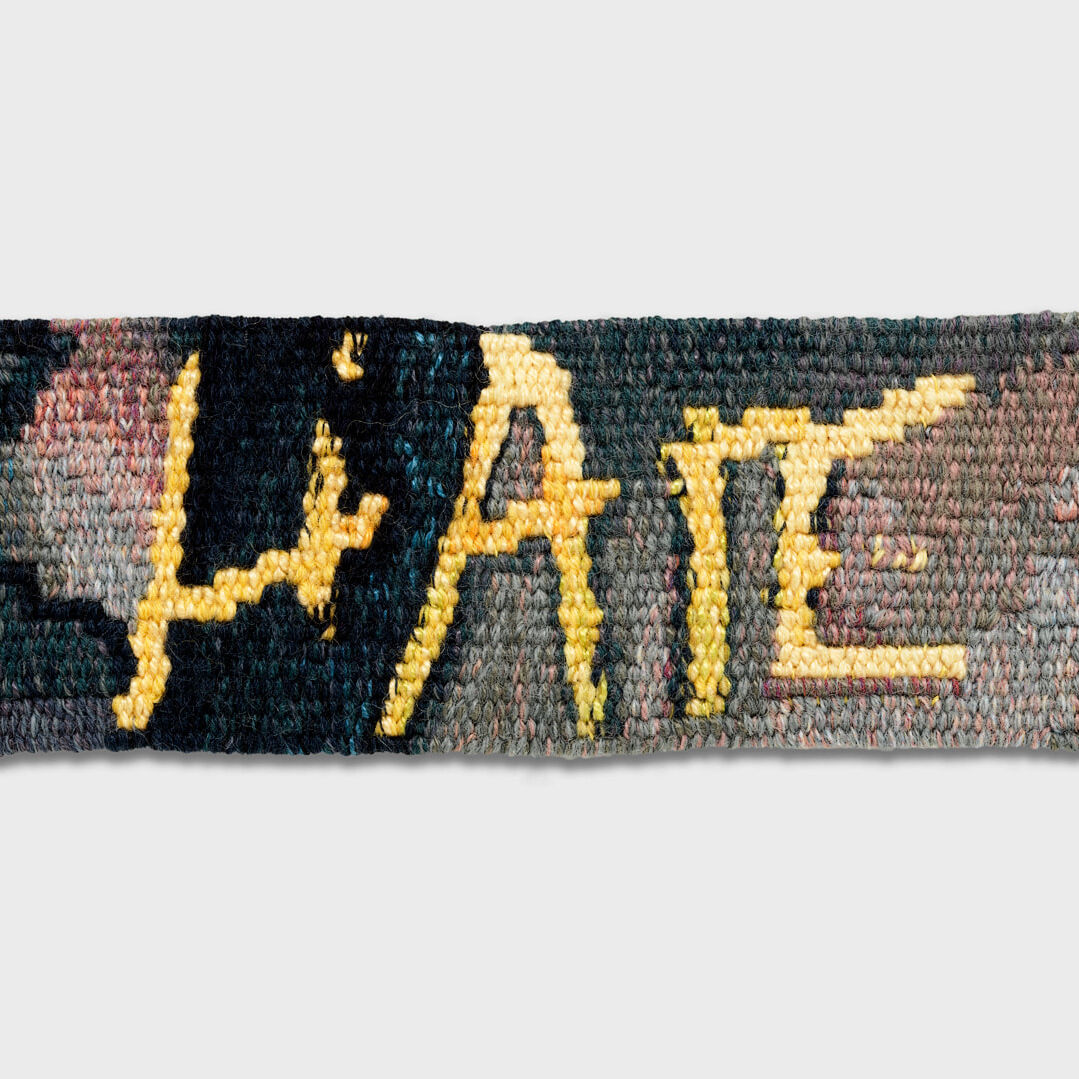 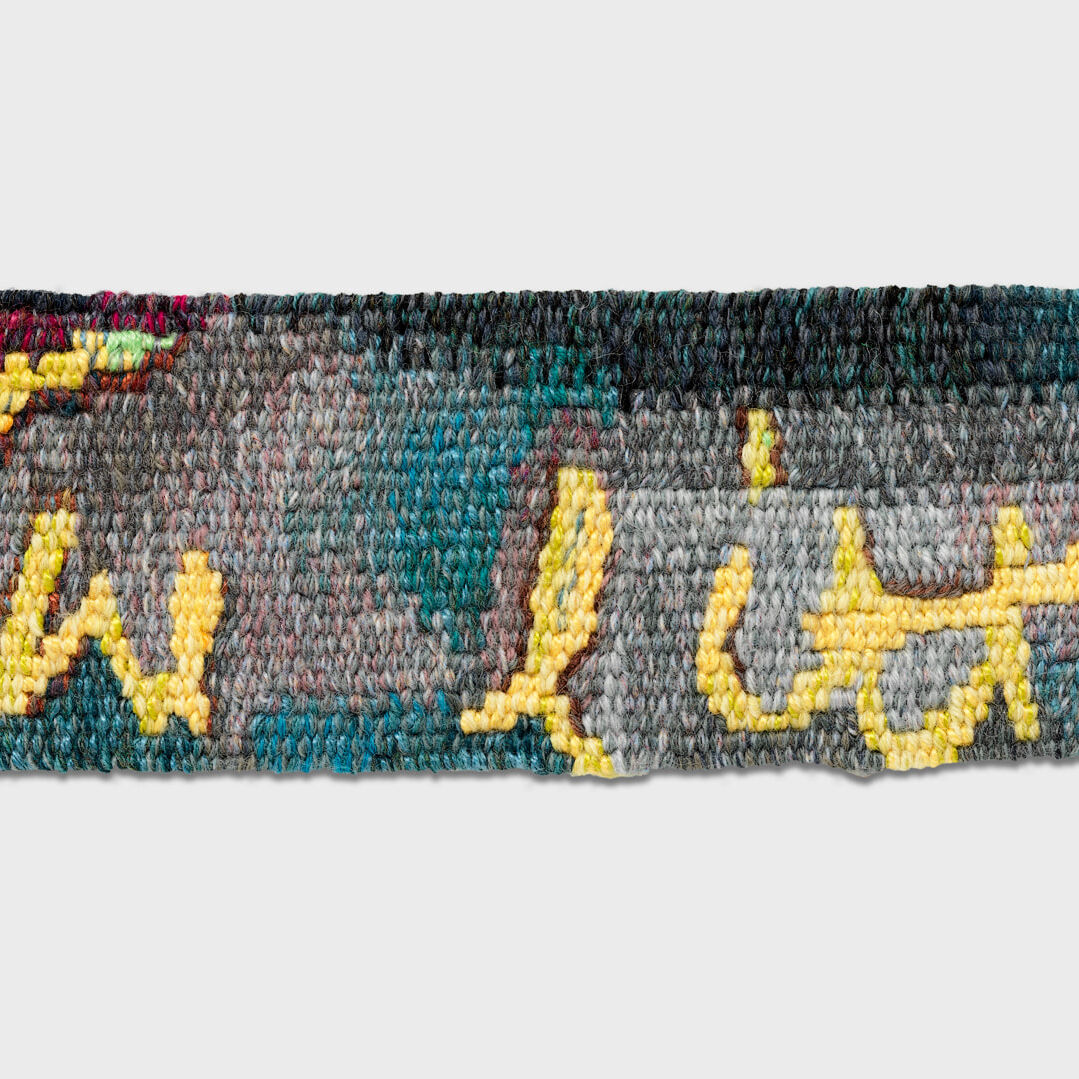